Vietnam in My Life

When I was born in March of 1973, Vietnam had barely come to a close.  The Cold War was turning into a high-stakes nuclear staring match between the U.S. and the U.S.S.R. throughout much of the 1970s until the late 1980s.  Those were the days of Reagan and Gorbachev, times that were marked by nuclear proliferation, the arms race, and deterrent (programs like “Star Wars”, etc.).

With my formative years consisting of all of the 80s, I literally grew up during the aftermath of Vietnam.  Feelings were mixed, and those feelings were reflected in much of the mainstream during my childhood.  My most prevalent memories are those of all the different media that dealt with and depicted various aspects of the Vietnam War.  As well, I watched as the Vietnam War Memorial wall was built in Washington, DC.  I later visited that memorial in October 2001, reading off the countless names and understanding much more clearly the significant sacrifices from that war.

In my childhood, the thought of Vietnam was an oddity of sorts.  Many veterans were still coming to grips with their societal acceptance.  From what I could gather as a young child, it seemed that in the world around me, nobody seemed to know for sure whether we won that war or not, or if there were any U.S. soldiers left behind, or if we had a purpose in going to war in the first place.  Unlike other wars with clear purpose, support and objectives, it seemed that the Vietnam War was a bit of a mystery.

Most of my information as a child came from the movies, TV and music.  A flood of movies addressed the various social issues surrounding the Vietnam War as well as touching on why it was so troubling to some for years afterward.  There were the basic hero movies such as “Rambo” and “Braddock: Missing in Action”, both purporting the notion that perhaps there were soldiers left behind in the battlefield.  These movies pushed the idea that yes, there were MIAs, we knew about them and the government refused to do anything about it for political reasons.  These MIAs were believed to still be held in camps in Vietnam, and while there was not a loud outcry, there were rumblings in society about whether or not every soldier had returned home from the battlefield.

Other movies such as “Apocalypse Now”, “Full Metal Jacket” and “Platoon” focused more on the day-to-day lives of soldiers carrying out their missions in the volatile fields of Vietnam.   Viewers were able to finally get inside the lives of typical soldiers in the war and see the social and psychological challenges faced.  Sometimes, these films dealt with the darker side of U.S. involvement in Vietnam.  Subject matter included the use of young Asian women for prostitution, the killing of innocent civilians and illicit drug use.

In addition, movies such as “Born on the Fourth of July” by Oliver Stone focused more on the post traumatic stress and the overall hardship of integration back into society by those veterans seeking to live a ‘normal’ life again.  I remember the character played by Tom Cruise, who came home in a wheelchair, crippled from his injuries in Vietnam.  Although fighting bravely to earn those injuries, he was subsequently treated as an outcast or lesser human being.  Many looked down on him because of the negative stories coming from Vietnam.  Some people looked down on Vietnam vets, calling them “baby killers”.  The movie shows the emotional struggle of a man trying to re-enter society, cope with the trauma of his experience, and fighting to regain the support of the people for all veterans.

Even in war, there’s humor.  One of my favorites is “Good Morning Vietnam”.  While it was a comedy starring Robin Williams, it also shed light into another area of the war that, until that time, had not been dealt with as much – information and propaganda.  The Williams character faced many hardships trying to walk the fine line between communicating the truth and exercising military imposed censorship.

In watching some of these movies, I viewed Vietnam as a confusing place with an almost “no rules” attitude in the field of battle.  That is to say, if you believe everything that happened as portrayed, the soldiers were presented as flawed protagonists.  They did whatever they wanted, without consideration of morals or laws.  The soldiers were also presented as carrying on a love/hate relationship with being in Vietnam.  Many didn’t want to be there, but found brotherhood with others in their units, and even did some strange and crazy things in the middle of battle.  An example is the classic scene of soldiers talking about surfing (and actually doing so) in “Apocalypse Now” while attacking the enemy.  Remember, “Charlie don’t surf!”

When I did not have a chance to go to the movies, I still heard about Vietnam on the radio.  Vietnam found its way into the musical side of pop culture when I was growing up.  I remember a musician named Paul Hardcastle who had a one-hit wonder by the name of “Nineteen”.  The song talked about the typical age of a Vietnam soldier, emphasizing the young age in contrast to those of enlisted soldiers in previous wars.  It contained audio clips from war coverage in the background.  Not exactly the hippest tune, but one that did very well on the radio for a long time.  In fact, it is still on the radio, as I heard it on the way into Winston-Salem just a couple of days ago.

There are other songs, such as Fortunate Son by Credence Clearwater Revival and War by Edwin Starr, that conjure up images of Vietnam.  These iconic images include the Hues (Huey) helicopters, the green camouflage uniforms, the infamous M-16 machine gun, napalm explosions.  I hear one of those songs and I immediately picture soldiers sitting around a radio at a base in the jungle listening to classic rock and roll, drinking beer and playing cards, waiting to be called into action somewhere.

While music and movies carried the themes of the war through the 1980s, television did so as well.  The Vietnam War was readily available in a handy sit-com and an action-adventure show, both airing daily on television.  I would sometimes come home from school and catch new episodes or re-runs of M*A*S*H.  This TV sit-com did give an interesting view of the inside of the war in terms of the wounded and injured, and how medical teams dealt with the challenges of treating soldiers in triage units in the field.   Around the same time of day, the A-Team would air.  This was a rag-tag team of four individuals that came together in Vietnam, went AWOL together, and returned to the states to become a team of ‘vigilantes-for-hire’.  They would find innovative ways of making weaponry to fight against those who perpetrated injustice on individuals, families, small groups or small towns.  Then they’d leave town fast to avoid capture with the military police one step behind.

Media depictions of the Vietnam War were quite diverse in my childhood.  But there were a variety of angles that were covered, perhaps more so than that of previous wars.  Old movies about World War II seemed to always center on the theme that our cause was right, our actions moral and heroic.  With Vietnam, you didn’t leave the theatre or turn off the TV and feel the same way.  Instead you were left with more questions about human nature in warfare.  While you might cheer on Rambo as he blows up an entire village of evil enemy Vietnamese on screen, you might also be spiritually and morally sickened by watching what Charlie Sheen’s character (“Platoon”) witnessed during his time in Vietnam. 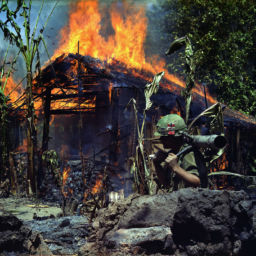 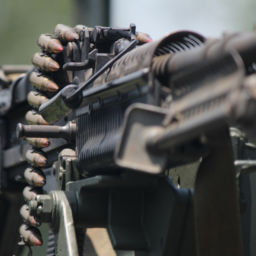 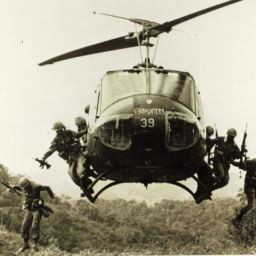