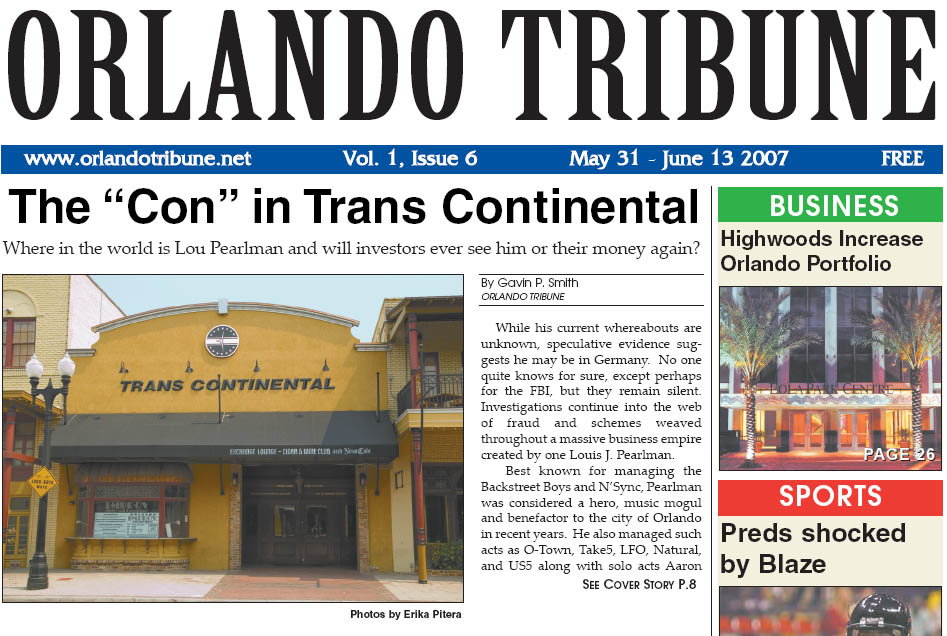 ORANGE COUNTY – There are many elusive fictional characters out there.  Some are easier to find than others.  Kids have been asked “where in the world is Carmen Sandiego”, and they’ve managed to find her.  Others have been asked to look at drawings and find Waldo.  Most have, with some effort, found him too.  But in real life, people can be much more elusive.  That brings up the hottest question in Central Florida on everyone’s lips.

Where in the world is Lou Pearlman?

While his current whereabouts are unknown, there has been some speculative evidence that he may be in Germany.  No one quite knows for sure, except perhaps for the FBI, but they remain silent about it.  Investigations continue into the web of fraud and schemes weaved throughout a massive business empire created by one Louis J. Pearlman.

Best known for managing the Backstreet Boys and N’Sync, Pearlman was considered a hero music mogul and benefactor to the city of Orlando back in the old days.  Pearlman also managed such acts as O-Town, Take5, LFO, Natural, and US5 along with solo acts Aaron Carter, Jordan Knight, C Note and others.  He also contributed to the downtown landscape, investing in and revitalizing Church Street Station.  People considered his businesses more than worthy of investment, and jumped on the bandwagon to invest in such “hot properties”.  Hoping for big payouts riding boy bands to the top, most of these investors are now wondering what they will do now that they’ve lost everything.

Most officials estimate that it will be difficult at best to locate or reimburse any funds to investors, especially as they continue to unravel the costs and the mess left behind by Pearlman.  The overall loss to investors, many of whom poured their entire life savings into the now defunct businesses, is thought to be almost a half billion dollars.

Although some people, including most of the investors, are shocked, there’s really no surprise here.  Unlike most who suffered in this scandal, if you dig deep enough, you find that Pearlman has always maintained shady bedfellows in business.  Long before he made his splash in the Orlando scene, Pearlman craftily laid the foundations of his ill-gotten gains.  In 1985, he took his air charter company (Airship International) public, but used a small-cap day trader to manipulate the stock trades of the company, allowing Pearlman to cash in on a large fortune quickly off of sold shares in a company that reported little revenue. 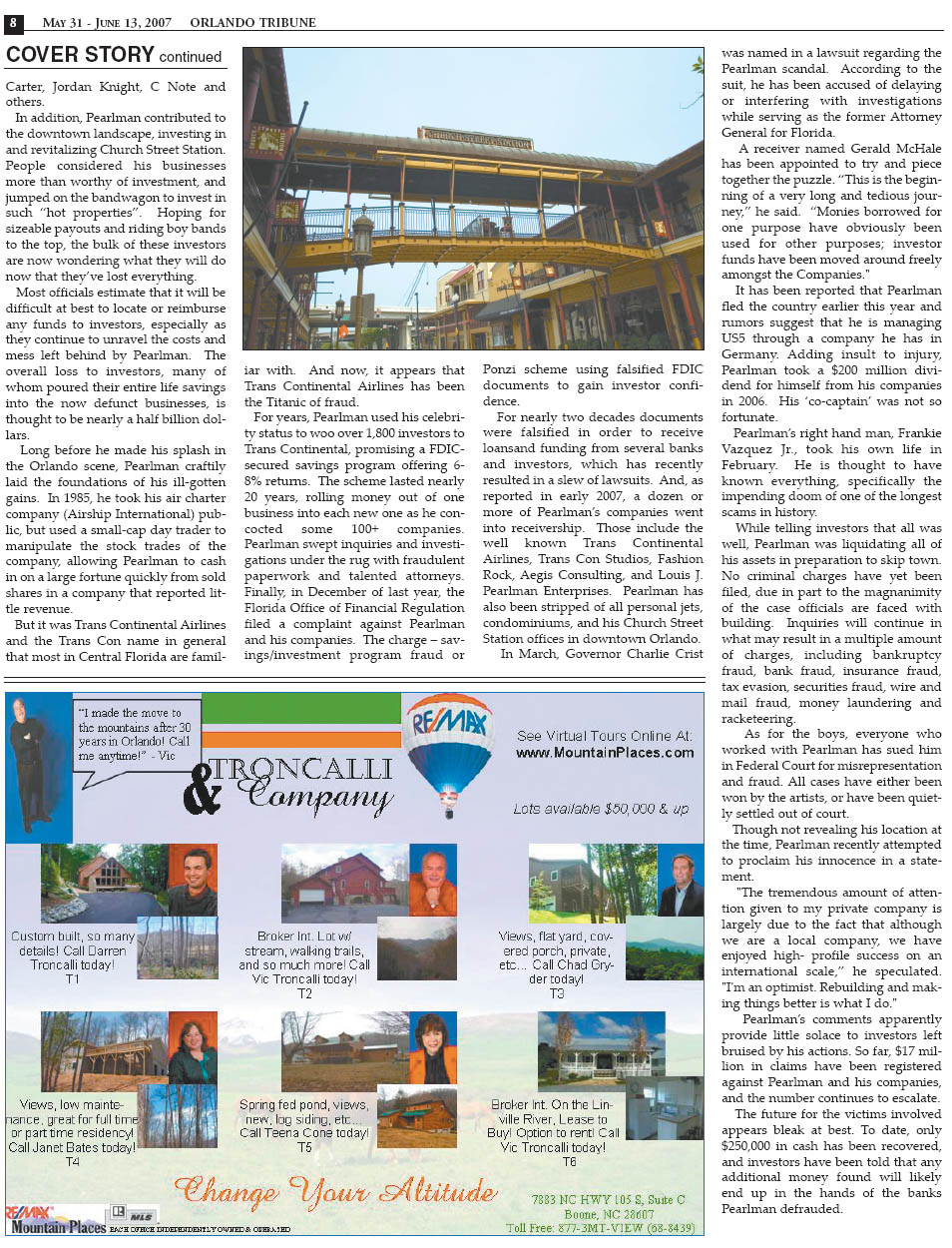 For years, Pearlman used his celebrity status to woo over 1800 investors to Trans Continental, promising a FDIC-secured savings program offering 6-8% returns.  The scheme lasted almost twenty years, rolling money out of one business into each new one he concocted, some 100+ companies.  Pearlman swept inquiries and investigations under the rug with false paperwork and talented attorneys.  Finally, in December of last year, the Florida Office of Financial Regulation filed a complaint against Pearlman and his companies.  The charge – savings/investment program fraud or Ponzi scheme using falsified FDIC documents to gain investor confidence.

Deception was the name of Pearlman’s game for almost two decades.  Documents were falsified to get loans and funding from several banks and investors, which has resulted recently in a slew of lawsuits.  And, as reported in early 2007, a dozen or more of Pearlman’s companies went into receivership.  Those include the well known Trans Continental Airlines, Trans Con Studios, Fashion Rock, Aegis Consulting, and Louis J. Pearlman Enterprises.  Pearlman was also been stripped of his personal jets, condominiums, and his Church Street Station offices in downtown Orlando.

A receiver named Gerald McHale has been appointed to try to piece together the puzzle. It’s getting even messier, and now involves the governor.  In March, Governor Charlie Crist was named in a lawsuit regarding the Pearlman scandal.  According to the suit, he is accused of delaying or interfering with investigations while serving as the former Attorney General for Florida.

“This is the beginning of a very long and tedious journey,” said McHale.  “Monies borrowed for one purpose have obviously been used for other purposes; investor funds have been moved around freely amongst the Companies.”

Unlike the captain of the Titanic, Pearlman did not stay on board to go down with the ship.  In fact, many would say that he practically jumped in front of the women and children to grab the first life raft off of it, slipping out of the country earlier this year.  It is rumored that Pearlman is managing US5 through a company he has in Germany.

Of course, he didn’t hop across the pond without his bags packed with tons of cash.  Adding insult to injury, Pearlman took a $200 million dividend for himself out of his companies in 2006.  His ‘co-captain’ was not so fortunate.  Pearlman’s right hand man, Frankie Vazquez Jr., took his own life in February.  He is thought to have known everything, especially the impending doom of one of the longest scams in history.

While telling investors that all was well, Pearlman was liquidating all of his assets in preparation to skip town.  No criminal charges have yet been filed, due in part to magnanimity of the case officials are faced with building.  Inquiries will continue in what may result in a multiple amount of charges, including bankruptcy fraud, bank fraud, insurance fraud, tax evasion, securities fraud, wire and mail fraud, money laundering and racketeering.

As for the boys, everyone who worked with Pearlman has sued him in Federal Court for misrepresentation and fraud. All of those cases have either been won by the artists, or have been quietly settled out of court. According to an old interview in Rolling Stone with ‘NSYNC star Justin Timberlake, the artist was straight to the point.

“I was being monetarily raped by a Svengali,” said Timberlake.

Unfortunately, he’s not the only one.

Perhaps the most fascinating aspect of Pearlman’s character is his ego.  Although fleeing the country and trying to avoid this mess, Pearlman recently felt the need to speak out from his “mystery location” and proclaim his innocence.

“The tremendous amount of attention given to my private company is largely due to the fact that although we are a local company, we have enjoyed high-profile success on an international scale,” said Pearlman.

Spinning bad into good, Pearlman thinks he can simply fix it. “I’m an optimist. Rebuilding and making things better is what I do.”

That’s no comfort to investors here at home.  So far, $17 million in claims have been registered against Pearlman and his companies, and growing.  Any who have yet to do so can file their claim at the Clerk’s Office of the Orlando Bankruptcy Court.

The bleak reality – so far, just $250,000 in cash has been found.  That’s it.  Investors have been told that if any money is found, it will most likely end up with the banks Pearlman defrauded.

Translation for investors – there’s little to no hope at all.